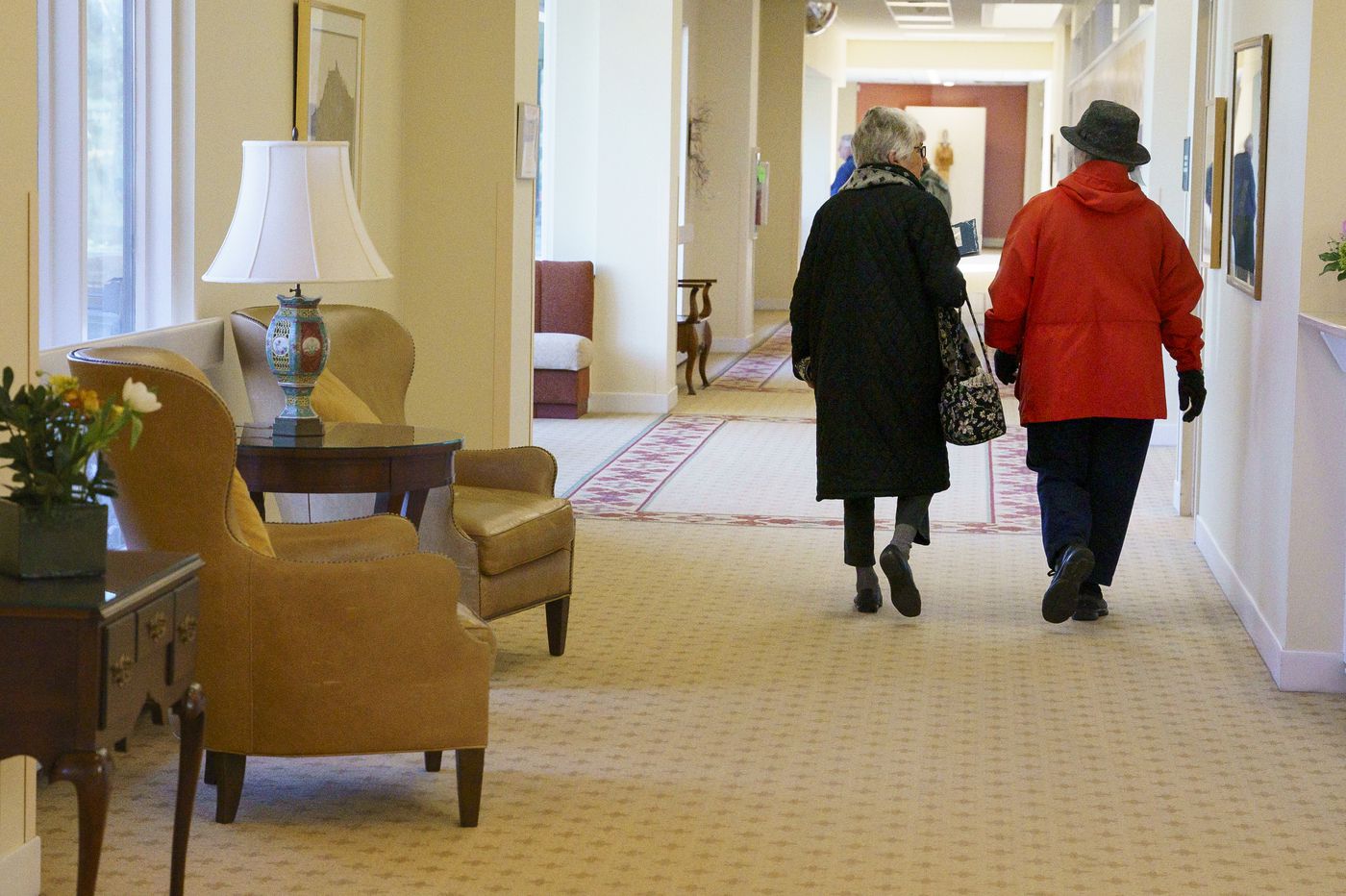 For Betty Vosskaemper, the question is when, not whether, she’ll move to a retirement community such as Pennswood Village.

She visited Pennswood, an 82-acre, Quaker-directed facility with 400 residents in Newtown, Bucks County, recently for a tour. She’d been there before to visit her older brother, Dan Seeger, a resident for 10½ years. Her parents had moved to a similar community — one that offers independent apartments, assisted living, and skilled nursing on a single campus — and thrived there.

After lunch in one of Pennswood’s three dining rooms, she and her daughter peppered marketing director Jennifer Doone with questions about the complicated finances of buying into the place, the impact of her long-term care insurance, and whether a woman who loves art, books and long, outdoor walks could be happy there.

Doone had already met that morning for nearly two hours with about 16 other prospective residents, some of whom said they were years away from an actual move. She understood that this is a huge decision, one that can feel a lot like picking a college. “Obviously, this is going to affect every aspect of your life,” she told the morning crew, who came well-prepared with questions about everything from which hospital residents go to in emergencies (St. Mary Medical Center) to how Pennswood plans to adjust to the arrival of baby boomers (later meal times).

Some, such as Vosskaemper, were sure that they wanted this kind of facility, if not necessarily Pennswood. Others, such as Mary O’Neil, 92, who still lives independently but had a health scare last summer, were sold on the social activity but also want to leave some money to their children. “It’s a terrible decision to make, because you know it’s final,” said O’Neil, who has toured five facilities.

In her office later that day, Doone told Vosskaemper that residents can walk from Pennswood to Newtown. She took Vosskaemper on a tour that passed the community’s art gallery and extensive library. They saw the spacious fitness facility and two versions of a one-bedroom apartment, which were bright and bigger than Vosskaemper had expected. She noticed room outside to garden, a big plus, and enticing trips on the activities board.

Vosskaemper felt good about what she had seen. Now a resident of a 55-and-up community, she’s ready to let someone else cook. She’s uncomfortable driving at night or coming home to a dark house.

A week later, she had seen four communities and was confused by fee schedules that made comparisons daunting. Some had higher deposits, but lower monthly fees. Rules for getting deposits back after a move or death varied. “It makes it very difficult,” she said. She could see that her heart and her “frugal nature” would have trouble agreeing, but she wants to decide by the end of the year.

“I’m glad I don’t need to make a decision in any sort of hurry,” she said.

Don’t wait for a crisis

Shopping for a retirement community is best undertaken long before a health crisis makes moving an emergency. As life decisions go, this kind of move is high on the stress scale: It likely requires leaving a bigger home, along with decades of memories, routines and belongings. There are big pluses — grounds you don’t have to care for, lots of stimulation, help that’s easy to access — but picking a new group of friends can be scary. Then there are the costs, which are high and highly variable.

“This is a multifaceted search with intellectual parts of it and deeply emotional aspects of it, and it’s necessary to take both things into account,” said Judith Coche, 77, a Philadelphia psychologist who is shopping for a retirement community with her husband. She thinks she’ll know when they find a place that’s a good match intellectually and culturally, one with the “sense of vibrancy” she craves. But, “it has to make sense in terms of the finances of it.”

For guidance on questions shoppers often forget to ask, we talked to nine experts, including representatives of nonprofit and for-profit care communities, residents’ associations, elder-care attorneys, and a geriatric care manager.

The Commission on Accreditation of Rehabilitation Facilities has a report on how to select a community and another on understanding the finances. For a fee, MyLifeSite.net allows side-by-side comparisons of facilities. And don’t forget the simplest thing: A Google news search for the community.

The experts agreed that the social part of the decision — finding a location and people you like — is the easy part. They recommend making multiple visits at different times of day. Eat meals there, and stay overnight if you can. Talk to residents not recommended by management. Pay attention to the environment: Poor maintenance and grounds keeping may be a sign of tight budgets. Check out the exercise facilities. Consider whether you’d like the activities. Find out what role residents play in community decisions.

Money and health care are the hard part

The harder parts are the money and the financial health of the facility. You want it to be around and in good shape longer than you are. On her first tour, Vosskaemper did not look at Pennswood’s personal care or skilled nursing wings. She plans to on future visits, but some people never do. Experts said that’s a major mistake.

While choosing a CCRC may feel like buying real estate, true CCRCs are really a form of long-term care insurance, experts said. That’s why they are regulated as insurance products.

Originally, most CCRCs had what are known as type A contracts. Residents pay an entry fee and then monthly fees determined by the size of their apartment that rise with the cost of living. Those fees remain relatively stable as residents need higher levels of care. At Pennswood, for example, single-occupancy entrance fees range from $119,700 to $442,600, and monthly fees range from $3,485 to $6,930. Personal care and skilled nursing residents pay $4,060 to $5,415 a month. Many communities have a benevolent fund for residents who run out of money.

Increasingly, communities also offer fee-for-service options, with lower costs for independent living, but market rates for more care. At Pennswood, which has offered this option about two years, single-occupancy entrance fees range from $93,800 to $437,800 and monthly fees range from $2,885 to $4,085. But personal care costs about $9,000 a month and skilled care $14,400 a month.

You have to be healthy when you move to independent living, so don’t wait too long. The communities will vet your health and assets. They don’t want your money to run out before you die.

You will be given a long, complicated contract. Read it, and have a lawyer and financial adviser review it. “The contract is king,” said Katherine Pearson, a Penn State law professor. Also request an audit and ask about occupancy rates. Experts recommend an occupancy rate of 90 percent or better.

What happens if my spouse needs assisted living before I do?

Who decides when I move to assisted living or the nursing facility?

Can I hire extra help in independent living?

How much of my deposit will be returned if I die or decide to move? Will the community hold the money until it finds someone to take my apartment?

If I have long-term care insurance, can I use it here?

Is there a doctor’s office in the community?

What is the average tenure of employees?

If I’m paying fee-for-service and run out of money, will you force me to move?

The Acts Retirement-Life Communities also has a list of suggested questions.